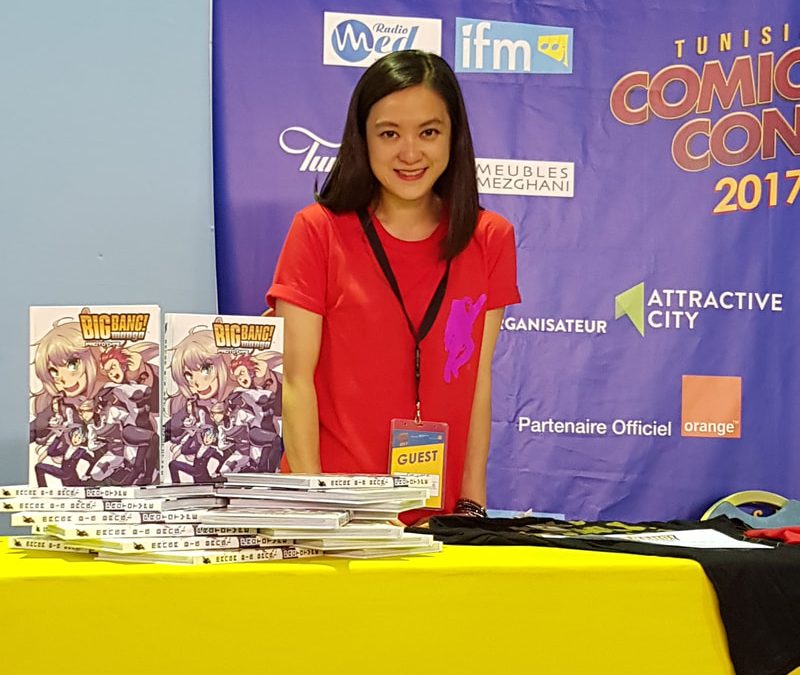 Dr. Vee, The editor in Chief of Manga Big Bang!, the creator of MBB’s manga series The Rose of Buckingham Palace along with co-author and musician GA for Little Rigatoni and the Revolution of the New Food Pyramid was invited as special guests to the second Tunisia Comic Con on 7th-9th July 2017.
​​

​What not many people know about Tunisia, a country bordering the Mediterranean Sea and Sahara Desert, is that it is a melting pot of different cultures and is far from the conservative image that is sometimes portrayed in outdated travel websites. Another interesting fact is Tunisia has 12 locations where George Lucas’ Star Wars film was shot, as well as Indiana Jones film sites. The most iconic one being the Lars homestead featuring the home where Luke Skywalker grew up in and the landscape of planet Tatooine.
​
Lars homestead is a distance away from Tunis. Star Wars Tunisia is organising guided tours to visit the sites. Dr.Vee and GA selfie-ing at Star Wars Tunisia exhibition booth.
​
Concert was held by local Tunisian band along with mass singalong of anisongs
​Comic Con Tunisia was held for the first time in 2016 and it is the first comic con ever held in North Africa. The founders, Mariem and Abdul Oueslati belong to the Star Wars Tunisia organisation, a group of Star Wars fans who restored the abandoned Star Wars film shooting sites, organize tours and campaign for its awareness and preservation. The idea of comic con started from there, and they started running smaller pop-culture events, discovered that there is a huge interest on everything related to comics, manga, cosplay, games, and films that eventually snowballed into a big convention.
New Manga Big Bang! merchandises were created for the event.
On the second day Dr.Vee presented by MC Karim spoke about the importance of staying faithful to one’s dream while introducing Dr.Vee Mangaka Club, the manga mentoring program or manga school that she founded in 2012 as well as Manga Big Bang!, English language manga magazine based in UK. There she spoke about the need for the world to learn the high techniques in comics creation employed as artists in Japan, where the industry is matured while communicating their own cultural identity to show different perspectives. Manga Big Bang! is aiming to unite the world in using the world’s lingua franca, the English language to tell stories by creators from all over the world to audiences from any background.
MC Karim, a renowned Tunisian TV Presenter/rap musician and Dr.Vee
​

Manga Hela, Tunisian concept artist who is known for drawing manga inspired wall murals
​
Dr. Vee were also featured as a judge for cosplay competition where the contestants dresses up in their own chosen character from comics, manga,  game, animation, or film. There are two other juries who are cosplayers themselves and the contestants are judged based on the physical likeness to the character, quality of the costume and the acting, which needs to portray the character while captivating the audience. There are many powerful performances e.g. spiderman crawling around the stage to exquisite costumes with fantasy animal prop. The performances were both entertaining and impressive for the audience.
First prize goes to Aymen Maghraoui as Sunwell Hunter, blood elf from World of Warcraft, second prize to Anouar Bouzrati as Reinhard Overwatch and third prize to Hichem Korbosli as Optimus Prime Transformers.
​
​Other special guests include David Mack, an American comic book artist and writer, known for his creator-owned series Kabuki and for co-creating with Joe Quesada the deaf Marvel Comics superhero Echo, Amr Hussein, the CEO of Koshk Comics, an Egyptian mobile phone app to read comics,  Chakib Daoud and Seif Eddine Nechi, Tunisian comic artists and evangelists. On the third day comic book talk was held as discussion panel between guests from different fields on where the future of comic book lies and the importance it plays today in spreading ideas and uniting the world.
​

Left to right: MC Karim, Seif Eddine Nechi, ​David Mack, ​Amr Hussein, Chakib Daoud, Dr.Vee
Comic Con Tunisia have succeeded in planting the seeds of opportunity for the creative talents of Tunisia and we are looking forward to see the movement spread throughout north Africa.